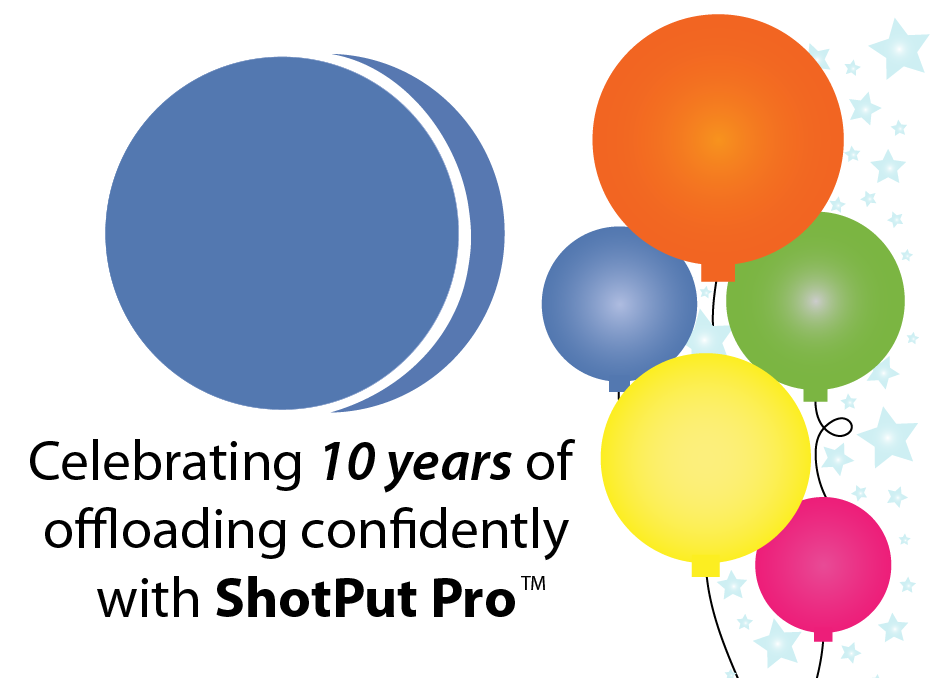 It’s the 10th anniversary of ShotPut Pro! We’re celebrating 10 years of making life easier for anyone who’s responsible for digital media files – and reflecting on the past.

At the time we invented ShotPut Pro, affordable HD video was just coming into being. Prior to that, everything was tape-based. Expensive cameras were recording to HD tape that had to be played on expensive players.

Panasonic and Sony were the leading camera manufacturers back then, and they were

developing direct-to-digital-file cameras. Panasonic had just introduced its first P2 camera under $10,000 to bring HD to the masses. It held two P2 cards at about 4 gigabytes each. When you filled one up, the camera automatically jumped to the second card and started filling it. At that point, you either popped out the first card and put in a new one, or you quickly got the material off that card, cleaned the card, and put it back in the camera. Manufacturers and users were only just beginning to figure out the workflow.

That’s when Imagine Products developed an instantaneous player for the P2 media called P2 Log. P2 Log was a breakthrough because, until then, there was no way to see the video you took out of the camera until you transcoded it to QuickTime, which took real time. Imagine if you had 10 minutes of material, and it took 10 minutes to transcode before you could watch it on something other than the camera.We made a player that could do that instantaneously and in doing so, we became familiar with the technology and the file formats.

So when Sony decided to do something similar with SxS cards and XDCAM EX – the competitor to the low-end Panasonic camera – Sony commissioned a similar tool for viewing the footage. In addition, Sony wanted a way not only to move that material quickly from the cards onto a hard disc, but to verify it was copied correctly before erasing the card. Imagine Products’ answer was ShotPut-Ex, an offloading tool made especially for Sony.

When the Panasonic folks saw what we developed for Sony, they wanted it too, so we made a ShotPut-P2 version of the software. Then the RED camera people saw it, and we developed a version for them. Now we had three versions of ShotPut. Finally, when ARRI came calling, we decided to stop making separate versions for each camera type. Instead, we created a tool that could detect the camera type and work with all the various file-based parameters and work for all of them.

And so, ShotPut Pro was born.

Before ShotPut Pro came along, people were simply dragging and dropping files from

one place to another without verifying anything, assuming everything was OK. Many people didn’t realize the importance of copying every single bit of data that was on that card, such as the audio files or the metadata. They often discovered – too late – that there was a problem downstream, when it came time to put the material into an editor. With the old tape-based workflows, the original material still resided on a physical tape, so you could always go back and redigitize it into the editor if something happened to the digital file. Not so with files on cards. Once you’ve done the drag and drop and cleared the card, the original is gone. There’s no going back.

So we began to make other tools for things like repairing damaged file structures. The file-repair function helped people recreate the missing files and check that all was well.

For the first few years, cards still had to be returned to the camera quickly because the storage size was so small and the cards were so expensive. (A 4-gigabyte P2 card was in the neighborhood of $1,200!) Thankfully, over time, cards got bigger and cheaper. But it always came back to verification: “How do I know things got copied properly?”

As people became more comfortable with digital-file workflows, they needed more features. Indices didn’t exist at the time, so people wanted a printout showing what footage existed within a session or project, instead of having to load each hard disc to find out. Enter ShotPut Pro’s reporting function, which helped keep projects organized.

A few years later, the DIT position became a thing, and professional data wranglers emerged. Then, it wasn’t long before insurance companies got involved, demanding checksum reports and an audit trail showing which camera the files came from and where they went, and proving that the copies were identical to the original. As a result, demand for ShotPut Pro grew.

And so, ShotPut Pro matured as the industry evolved. Every time an operating system changed, ShotPut Pro changed. Usually, the changes took place in the background and had to do with file handling. For example, ShotPut Pro never just did a simple copy to Finder or Explorer. Instead, there were always low-level copy functions going on behind the scenes, such as byte comparisons to verify that original and copied files were exactly the same.

Over time we added even more features and functions that simplifies proper digital offloading.

Presets were a major improvement because they made it possible to store commonly used naming conventions, output destinations, and other parameters rather than rebuilding them every time. Later versions came with other options, such as automated file naming. Presets became more and more important as more professionals got involved and the volume of content increased. They make it easier for numerous people working on the same project to track things and stay organized.

Back in the early days, ShotPut Pro would simply copy a card onto a hard disc and create a folder with whatever name you gave it. All the contents of the card went into that one folder. But now things are more complicated, and you want to have a folder and subfolders for the project, the camera, the shoot dates, and the specific cards.

Metadata sensing also became important, it’s a routine that examines the video; determines the type; extracts information such as frame rate, duration and timecodes; and extracts thumbnails. As a result, you can run reports containing one or more thumbnail samples, so you have an idea of what each clip was about. Metadata sensing was a massive change and a major improvement, especially because a lot of producers use those PDF reports to communicate with their clients.

All along, we wanted to make a product that would yield good results without a huge learning curve. The beauty of ShotPut Pro – and why people like it so much – is that it’s very simple for a beginner to use, yet it has many layers of complexity. The deeper you dig into the features and options, the more sophisticated it becomes, so it appeals to everyone from super pros to casual users.

When we first launched ShotPut Pro, a casual observer might have seen it as “just a copy utility”. And it was! But more importantly, it was – and still is – all about making things easier, trying to eliminate human error. Because let’s face it: A lot of time you’re tired. It’s the end of the day, and you just want to get done and go to bed. That’s when mistakes get made, and that’s when ShotPut Pro tries to keep people from doing foolish things.. like erasing a card before it has been copied or overwriting the original.

Thanks to all these cool things, ShotPut Pro has had a major impact on the industry and has earned its place as the way to offload and verify files. Because we entered the digital-conversion revolution early, ShotPut Pro became the standard. There are many ways to copy files, obviously. The questions are, how secure are they, how easy are they, and how fast are they? ShotPut Pro is quite frequently specified by insurance companies, TV and movie producers, dealers because it is all three, and they trust it implicitly.

So where will ShotPut Pro go in the next 10 years? Stay tuned!