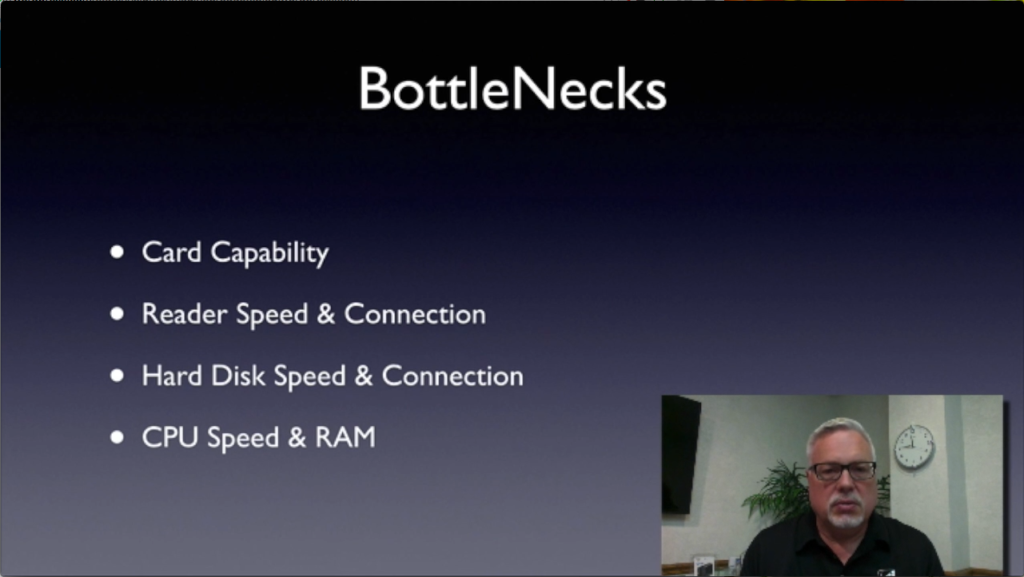 Watch an excerpt from the Moviola.com webinar: Data Wrangling in the Digital Age

Offloading camera cards quickly and securely is possibly the most crucial part of the filmmaking process. Recognizing and eliminating issues that may slow down this process can save valuable time, money and resources. In this blog we explore the bottlenecks of offloading and give several suggestions to offload as quick as possible.

First, know the media type you’re working with and its expected performance.

You can expect a faster read than write of digital media. For example, a SanDisk CFast memory card writes at about 240MB/s but can read back more than double that speed at 515MB/s. Once you anticipate the media’s top performance, you can size the other components of your system.

How are you going to connect the reader? For example, a FireWire800 can transfer about 100 MB/s while USB-3 can zip along at more than six times that at 625 MB/s. However, be aware that most portable computers have only one USB bus so each device plugged into a USB port splits the bandwidth.

Also realize that multiple slot readers are only as fast as the cable that connects them to your computer. So queuing up two SxS Pro cards that can offload at 150 MB/s in a reader means you need a computer connection and output hard disks that can handle over 300 MB/s to match the card’s speed.

Output Hard Disk Speeds and how they’re connected these days are the most common bottleneck. With a typical 7,200 RPM external disk you can expect about 100-120 MB/s write speeds, while an SSD drive can accept well over 400MB/s.

In general, computer resources such as CPU speed and RAM are generally not the limiting factors. What’s more important are the connections to the computer and the operating system’s memory management. Always use the latest operating system if possible—after all, there’s a reason Apple and Microsoft keep updating those!

If you would like to learn more about data wrangling check out the FREE webinar, Data Wrangling in the Digital Age on moviola.com. http://tinyurl.com/z9w2598